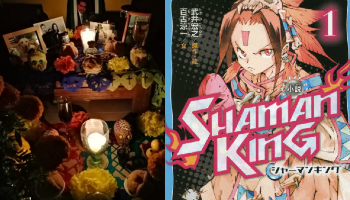 Thankfully, we've received lots of applications to CDJapan ambassador project to support us by providing articles. Let us introduce you a great article by Nisla about the relation between Japan and Mexico through the festival of the Dead. Hope you enjoy this article like we thrilled on reading through.

The Obon Matsuri is celebrated in August over three days, usually between the fifteenth and seventeenth. In some Japanese regions, the dates have varied within the same month.

The so-called Festival of the Dead begins with the traditional Bon Odori dance ("Odori dance" or "dance of the dead") to the sound of a giant drum (taiko) which is how the deceased are welcomed, performed in parks or places where there are Buddhist temples, around which people form a wheel and dance around a tower from which threads that hold paper lanterns come off. 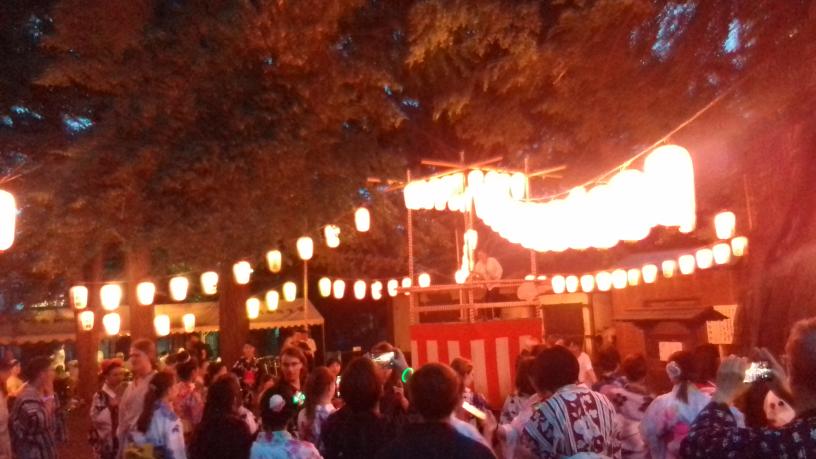 To their deceased, they place offerings inside their houses in front of small Buddhist altars. The offering consists of onigiri, cucumbers, eggplant, sake, sweets, candles, incense, and photographs. 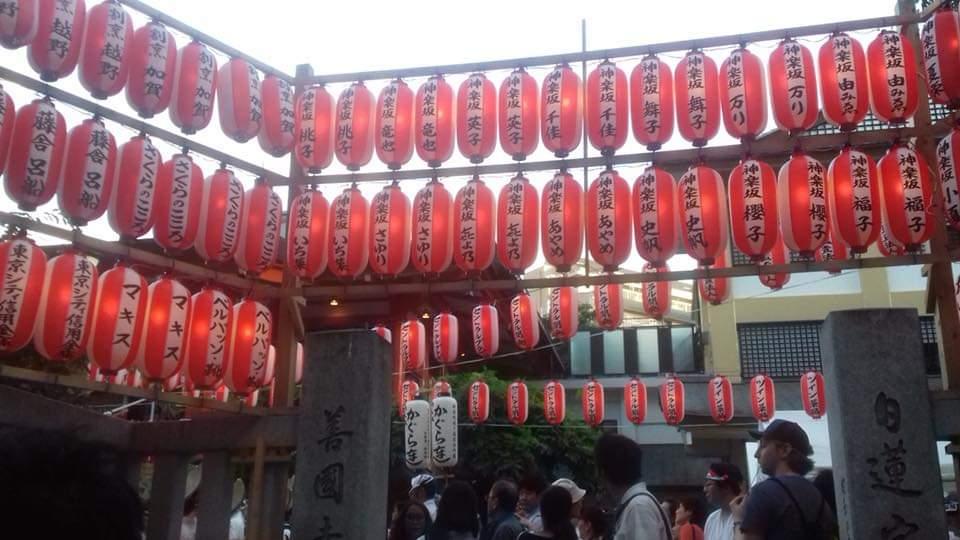 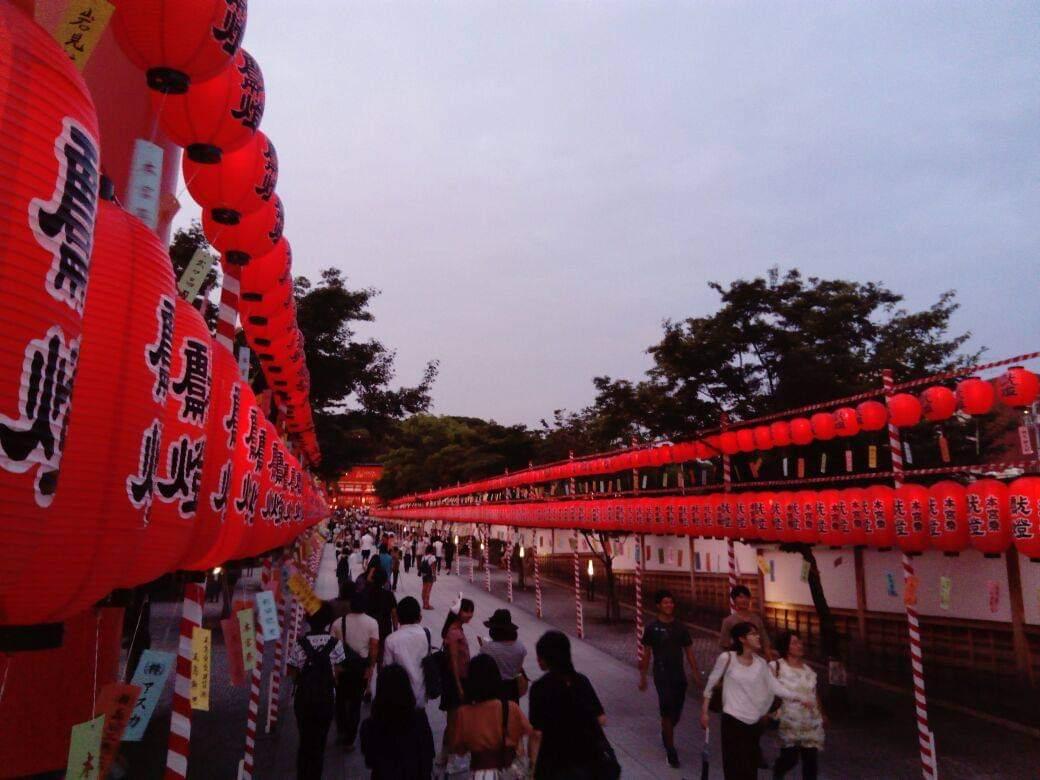 On the last day of the Obon festival, at night, the lanterns are removed, and it's a tradition to let them float on a river or sea, symbolizing the return to the world of the dead.

Mexico's The Day of the Dead

In Mexico, there is a similar tradition, but it happens on November first and second: Día de Muertos. The Day of the Dead is a festival of pre-Hispanic origin, attributed to the Mexica culture. After the arrival of the Spaniards, they mixed elements of the native peoples cultures and Catholic religion with the Mexica cult, some aspects of this rite were foreign to Europeans.

Preserving the essence of its origin, this festival is the most colorful that we have in Mexico, since it brings us closer to our dead and our roots, including the contact between those cultures that shaped us into what we are today.

The elements of their offerings are similar to those that are placed in Japan, since the food is what they receive from their living, the candles are the guide to their houses (as well as the lanterns of the Buddhist temples), and the photographs evoke the deceased. 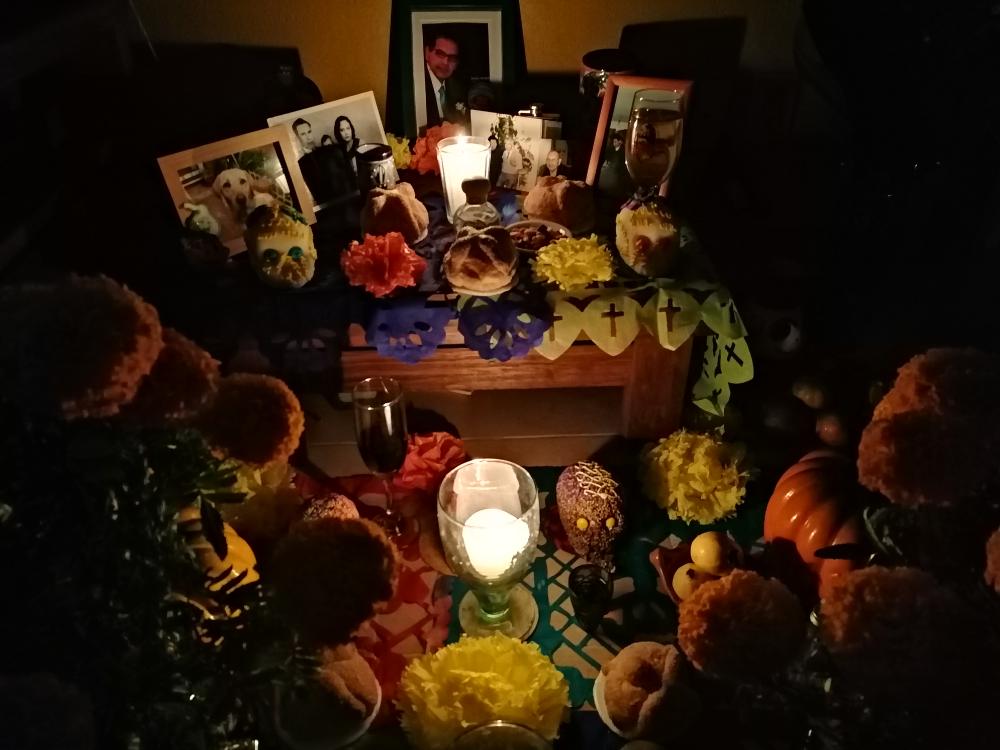 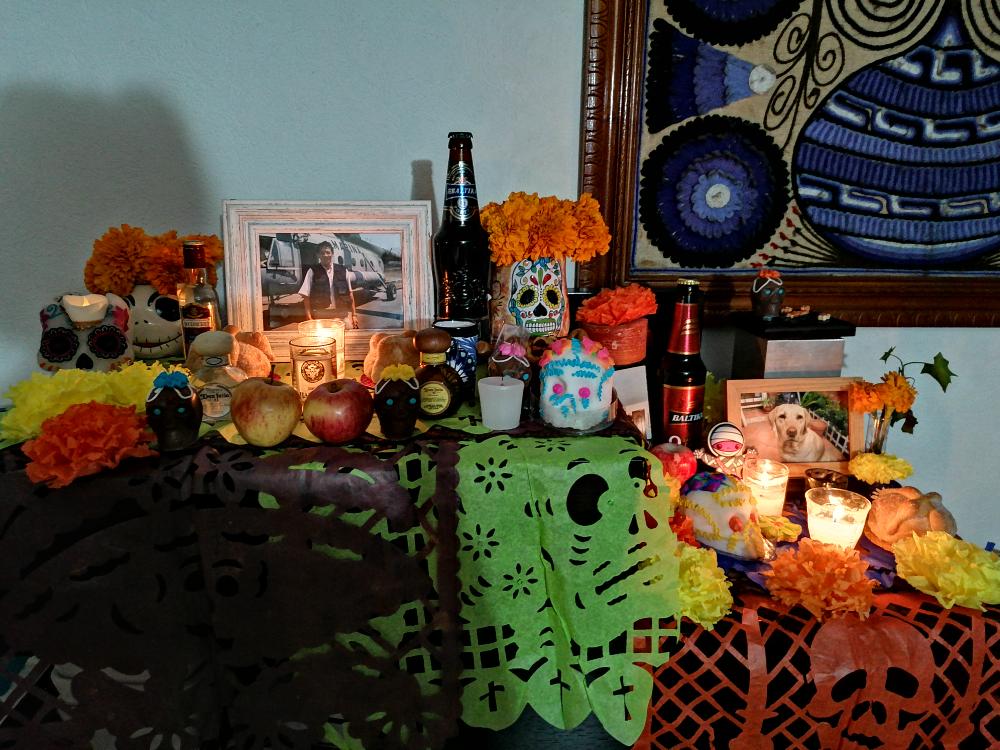 Also, in Mexican altars we put “calaveritas”, little chocolate or sugar skulls. These represent death according to the tradition of Mesoamerican cultures. 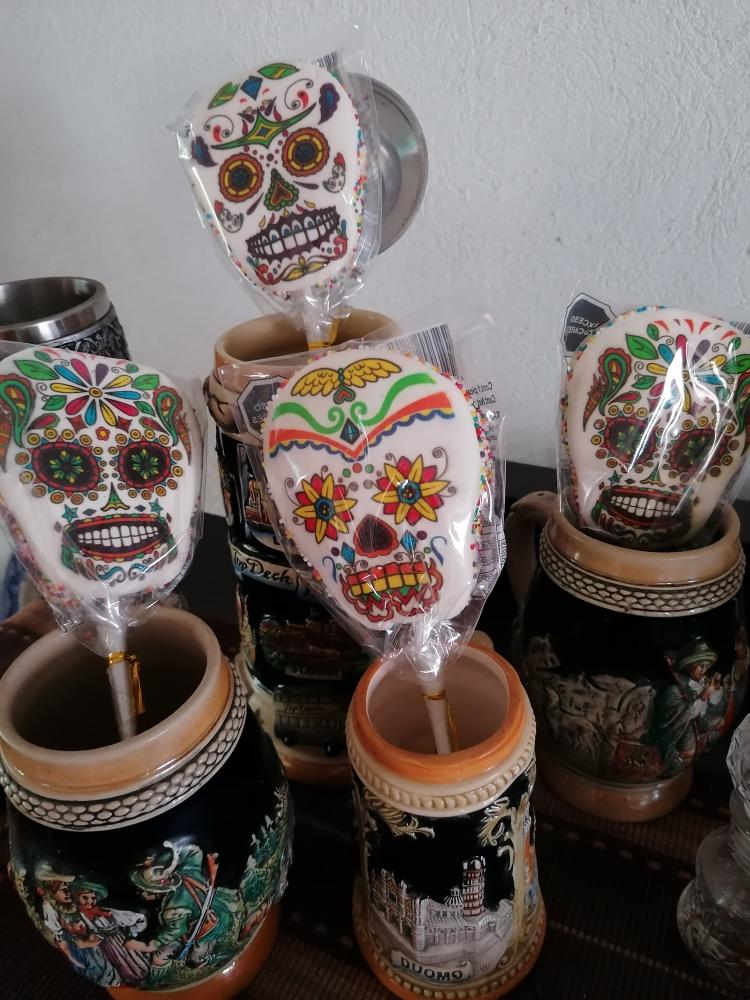 The Cempasúchil flower is the symbol of the festivity. Our ancestors assimilated the yellow color of the flower with the Sun, which is why they used it in the offerings dedicated in honor of their dead. “Pan de Muerto”, or Dead Bread, it´s made in different ways. 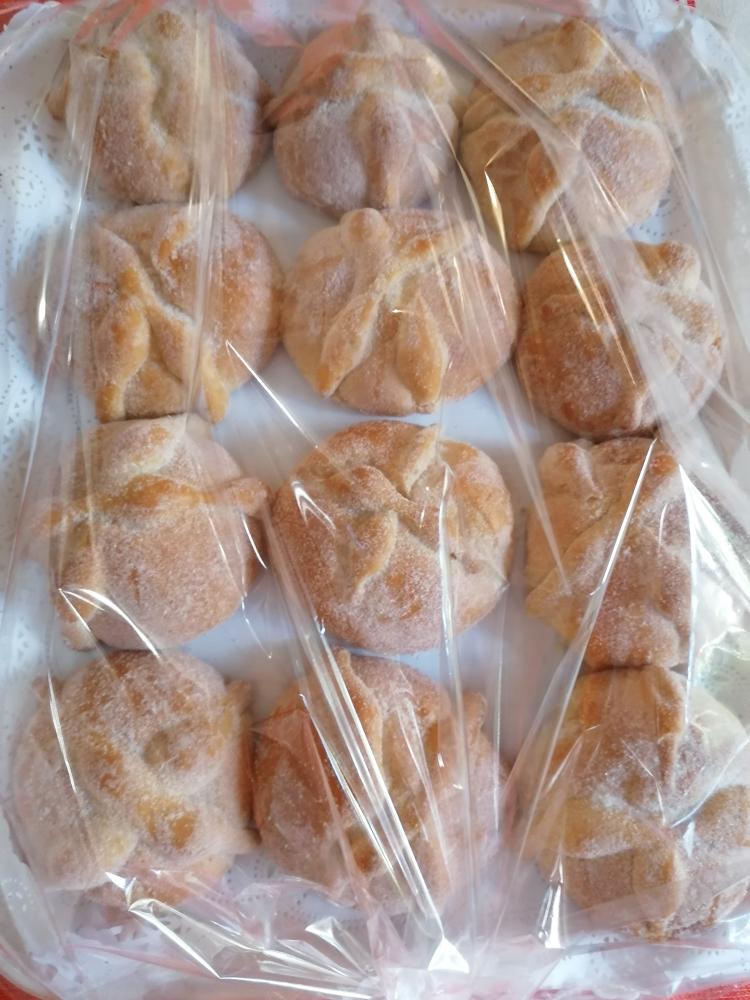 The bread is one of the most precious elements on the altar, which means fraternity or affection towards loved ones who have already departed. Its shape simulate the bones. The “papel picado”, or paper banners, not only gives color and joy to the offering, but also represents the air, as one of the four elements that must be present in any offering. 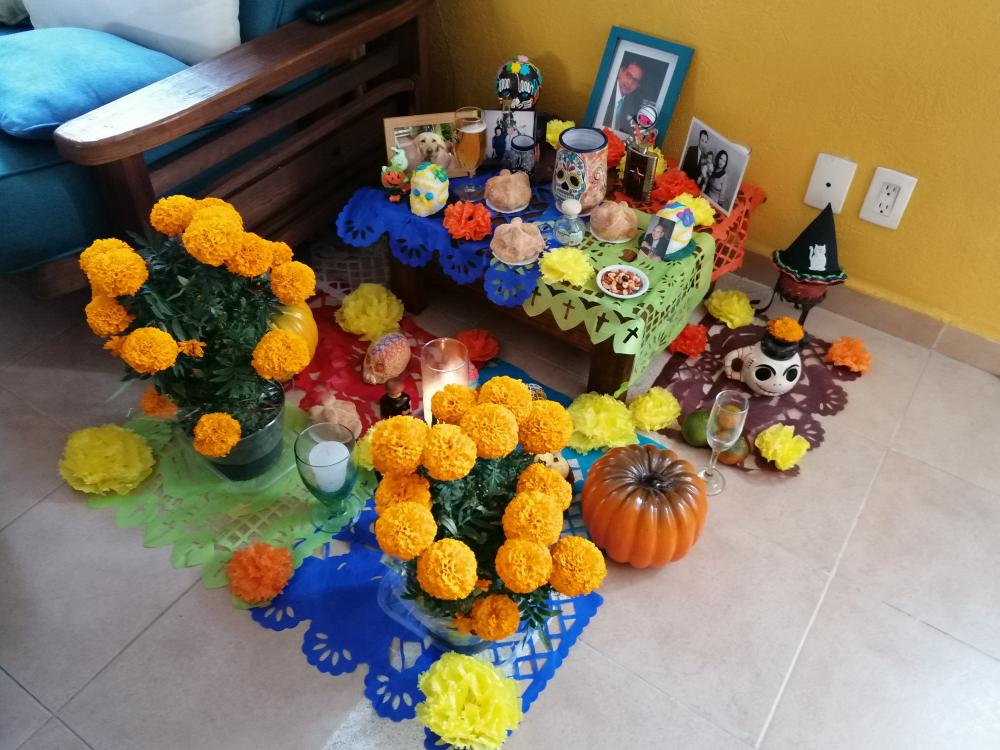 Within the manga Shaman King, by Hiroyuki Takei, there is a mention about our festivity, which makes me very exact how it is painted and the mood of Mexicans regarding death.

In principle, this work focuses on shamans, described in the manga as those people who serve as "a link between this world and the other. They are very important people who can establish a community with the deities and the spirits of the earth, from whom They use their powers on their behalf. Throughout history, we observe the ties between characters with these characteristics of various ages and nationalities with the spirits with whom they have signed a pact and whom they call "familiars", a term used within shamanism, Buddhism and the occult arts. to denominate those entities that serve a "master" and pass on their knowledge to future generations of the latter.

A story arc within the plot focuses on the Shaman´s Tournament, which only occurs every five hundred years, and the intense battles that take place between various groups of shamans with varying abilities and spirits, each seeking to be the winning team that achieves victory. merge with the Great Spirits that represent Nature and control the course of the world. And it is the protagonist, Yoh Asakura, who aspires to be the Shaman King.

In the first battle of the tournament, the team made up of the characters Ren, Horo Horo and Chocolove faces the one from Earth, who works for the antagonist of the play. The Earth team is made up of a Mexican shaman named Peyote Diaz and two Japanese Buddhist rock monks. Peyote has as accompanying spirits a band of mariachis, who died in a fight inside a bar. He uses various skull dolls as conductive tools for his spirits, which are possessed by the mariachis to have a physical form and be able to attack their enemies.

During this fight, one of the characters, Anna, upon seeing the skull dolls, mentions that "in Mexico skulls are a symbol of death. In Mexico they celebrate the dead...once a year, the dead return to this world to come to toast and eat. For Mexicans, death is something familiar and joyful. For this reason, on that day they decorate with skulls and many other things." For us, the skulls symbolize each one of the dead that the family has.

Later, Anna adds that the Day of the Dead bears a strong resemblance to the Japanese Obon Festival.

It is beautiful how two cultures so far apart have a festival towards Death, in which the remembrance of our deceased and the spiritual guidance that is given to them so that they arrive at their homes make the nights not so lonely for those who have lost a to be loved. In the end, Death unites us and sensitizes us, and remembering and celebrating it makes us feel more alive and more aware of the path of life.

My name is Nisla (ニスラ), but I’m also know as Yuki Vongola. I love the Japanese culture, history and pop culture as anime, manga and videogames, and write about the impact of Japan in my country, Mexico, such as festivals, concerts, film screenings, as well as relating some anime and manga plots that have to do with Mexico or with some current situation that is live in the world. Or recount my experiences on my trips to Japan. I also like to make reviews so that more people are interested and fall in love with Japan, as I have done.

All photos in this page are taken by the author.