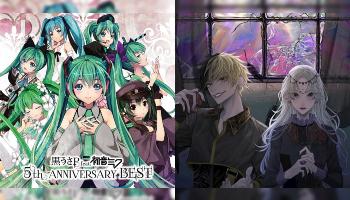 In 2020, even under the tough situation caused by COVID-19, we encountered several new Japanese acts who have excited us very much. At the same time, we noticed that they seem to be strongly influenced by Vocaloid culture (of course, incl. Hatsune Miku). In this page, we've compiled a list of such new comers and figured out the connection between them.

First of all, we've put three music videos, each act is booming through out the people living in Japan in 2021, especially young generation.

What their MVs have in common?

Uptempo. The melodies come out in rapid succession. Layers of sound created by programming. Lyrics projected on music video. How to use anime and manga. . . if you think you've seen this scene somewhere before, you may have a keen sense of Japanese music culture.

As we have seen and noticed, their music seems to be strongly influenced by Hatsune Miku and Vocaloid culture. To support this guess, several interviews and features that can be read in Japanese also mention about it.

For example, Real Sound, one of the major Japanese web media focusing on artists' review and news about music, wrote an article, titled, "Ado has had a string of hits as Utaite: "Usseewa," "Ready Made". . . will she be a bridge between Vocaloid music and J-Pop?"

On the top of that feature, they wrote:
"The arrival of Ado, a revolutionary singer in the Vocaloid culture, was a shock. She was born in 2002 and is 18 years old. She first encountered Vocaloid culture when she was in elementary school when she came across the anime version of "Kagerou Project" by Jin.

What brought her to attention was her participation in Kujira's "Kinmokusai feat. Ado," which was released on December 23, 2019. The song now has more than 12 million views on YouTube."

After viewing this video, you must notice that her way of singing there is very smooth, very different from the one she sang at "Usseewa" above. Yes, she controlled her voice depending on a song very dramatically. It's like Ringo Sheena.

As for the other two as well, if we read their profile articles on Nico Nico Douga, we can easily assume that their careers are closely related to Vocaloid culture.
*Nico Nico Douga is a Japanese video-sharing service which Vocalod culture deeply familiar.

As for FantasticYouth, they are written like: FantasticYouth is a unit formed when they post a music clip "[Rap Arrange shite] DAYBREAK FRONTLINE Utattemita [LowFatxOnyu]" on December 5, 2016. The two members are a female singer "Onyu" and a male singer, rapper and Vocaloid P "LowFat."

As for yama as well, Nico Nico Douga wrote as: she started her career as a singer covering Vocaloid songs since 2018.

What is noteworthy here is that more and more artists are originating from the Vocaloid culture. What's more, from their early days, many of them are creating their own music without Vocaloid, and not as Vocaloid producers. It's as if they are using Vocaloid culture as a medium to create a new wave.

Of course, we've already known that the most popular artist originating from the Vocaloid culture is, Kenshi Yonezu.

However, in 2009, when he started his activity using Vocaloid under the name of Hachi, such artists would have been in the minority yet.

Vocaloid culture in 2020 and beyond is


Top of This Page