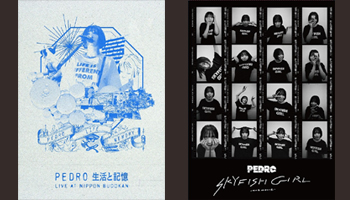 PEDRO, a solo project by Ayuni D (BiSH), to release a live video and a documentary film simultaneously on July 7th!

The documentary goes behind the scenes of PEDRO's three years of activities that premiered on YouTube on February 10. Also includes newly revealed backstage footage of the concert held at Nippon Budokan. Limited edition comes with a photo book shot in past three years (100 pages / subject to change).