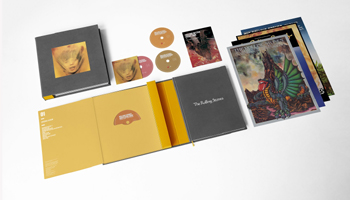 On September 4th, 2020, Stones' "Goats Head Soup" will be reissued in several editions/formats. However, as you visit here (CDJapan), you should focus first on this edition.

This Japanese edition exclusively includes two bonus tracks: "100 Years Ago" (Glyn Johns 1973 Mix), "Can You Hear the Music" (Glyn Johns 1973 Mix).
In addition to that, the CD discs included in the box features the high-fidelity SHM-CD format, which is perfectly compatible with regular CD players, and is also Japanese edition exclusive feature.
Although the rest contents of this release will be identical to the worldwide release, let me write down just to clarify how great this box is.

If you just want to experience SHM-CD quality, these will be your choices, which are more reasonable on price.

If you are a collector, how about this UNIVERSAL MUSIC STORE exclusive edition? This is listed through our proxy shopping service.