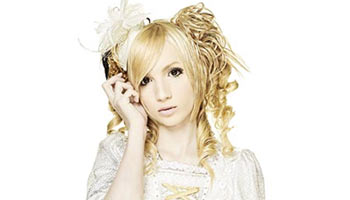 YOHIO, born in a musical family in Sweden, started writing songs and formed a visual kei band Seremedy in the summer of 2009 when he was 14-year-old. After performing at UppCon, the largest Japanese pop culture convention in Scandinavia.

YOHIO, born in a musical family in Sweden, started writing songs and formed a visual kei band Seremedy in the summer of 2009 when he was 14-year-old. After performing at UppCon, the largest Japanese pop culture convention in Scandinavia, and XO-Club in Moscow in 2010, the band signed contract with Nintone Records / Universal Music to release their debut EP "Seasons Will Change" in 2011. On October and November of the same year, they performed at V-Rock Fes II as an opening act. After the band's successful activities, YOHIO finally made his solo-debut with "REACH the SKY" in 2012.

So the mini album "REACH the SKY" is going to be released on 25th April, but how did you first feel about Japan debut?

Well, at first I was quite shocked. But it didn't really sink in, and still hasn't (laughs). Since I didn't have songs done, I started working right away. Some of the songs were old ideas that I renewed, and some are all new.People may think that you can just debut, without doing much. But that's very wrong (laughs). I'm actually so into my work that I don't really realize what it is for. What I'm trying to say is, that I'm very happy about debuting, of course, but there's so much work behind everything that I sometimes forget that I'm actually debuting. Maybe it's sinking in more and more as the release approaches!

You started learning guitar at the age of 11. What made you start the guitar?

I started learning guitar because of a song. The song itself is a secret, but it was a song with a very powerful guitar riff, and I thought: "I want to learn how to play that!" So that's how it all began. I asked my father - who is also a professional musician - how to play it, and he taught me.

You are singing all the songs in Japanese for this album, so what is the secret of learning Japanese?

That's right. The secret of learning Japanese - or any language actually - is to be surrounded by the language as much as possible. For example, you should read Japanese blogs, follow Japanese people on Twitter, watch Japanese TV-series such as dramas, etc.A good may of learning is also to actually visit Japan for real. I've been there 5 times now, and I always learn something new! It's one of the best ways, because you're always surrounded by Japanese people who speaks the language fluently. In that way, by just listening you learn a lot. And of course, they can correct you if you say something wrong!

What kind of album do you think the debut album "REACH the SKY" has become to you?

It's one of the most important releases I'll be doing in my life. Because it's my first release in Japan and my first solo release ever. I see it somehow as the real start of my career.

When and how was the first song of the album "REACH" made?

"REACH" was made for the purpose of my band Seremedy, sometime around summer last year I think. The song didn't have lyrics until I decided to use it fo "REACH the SKY" though. I felt like I wanted to sing it myself, and that's why I chose to use it for my solo work.Even before the decision was made that I was going to debut as a solo artist in Japan, I felt like I wanted that song for my own in some way. So the first song that popped up in my head when they said I was going to debut was naturally "REACH."

The second song "SKY LiMiT" is a very pop and cute song. Please tell us how this song was made.

The first stage in the making of "SKY LiMiT" was the very first intro. It's exactly the same in the final mix as when I recorded it the first time, same sounds and everything. It was just a melody that came up in my head, so I went to the computer and recorded it with the synth sounds you can hear in the now full song.This was in the summer of 2011 as well. I didn't think of making it into an actual song until the idea struck me while I was looking through my computer for songs to use for my solo debut. I thought: "Maybe this will fit as a pop-rock song?" So I translated the synths into guitar, bass and drums and started building a song around the same melodies as the intro. And it turned out really special, I must say. Because of the very special way of making the song, it turned into a very special song in the end.

The rhythms of the drums and how you play the guitar is not something I've done before. The chorus is a bit more normal than the rest of the song, but the intro and verses are really abnormal (laughs). Anyways I think it's a good thing, and something that people can appreciate.

The third song "Frantic Elegance" is a guitar instrumental track: please tell us the main attraction of this track.

"Frantic Elegance" is a song that I composed before the plans of the solo debut came up. I think the main attraction of this track is just that it's an instrumental. The focus lies on the guitars and composition itself. I didn't just want to show off my guitar skills, I wanted to make a good composition as well, with good melodies to back the shredding up.And in the end, I think it's actually more melody parts than shredding (laughs). But that's kind of the point. I wanted to be able to express feelings purely through my guitar, without needing any words at all. In composing, to me, balance is everything.

What kind of song the fourth track "Dawn of Dreams" has become?

This is the most modern sounding song of them all, and I had that in mind while composing it. "Dawn of Dreams" was the only song that I made completely from scratch, and solely for the cause of "REACH the SKY." It took only 2 days to finish, but I put a lot of emotion in it while making it. I tried to put as many elements, both musically and vocally, in the song to show my versatility.As you can hear, there's clean vocals, screaming vocals and rap. This is the first time I'm showing the world my vocals, so of course I want to show all of my sides.

The lyrics are also very versatile. It's mainly in Japanese, but the screaming parts are in English, and in one part of the song I've included a line in Swedish! So basically what I'm trying to say is that a lot of things are going on in this one (laughs).

Please tell us the theme of the fifth song "Without Wings - Sora to Yakusoku shita -," which is an only ballad in the album.

I started composing this song in the summer of 2010 (!). My band Seremedy were going to play a show in Moscow, Russia, and we didn't have enough songs for the set (laughs), so I made songs like crazy. The plan was that I was going to sing it myself, exclusively at the live in Russia. But unfortunately I never finished it in time. Anyways, I finished it in the fall of 2011, since I had ideas for the theme of the lyrics. The song is about a bird that made a promise to the sky, but he lost his ability to fly and therefore he can't return anymore. It's a very tragic song, but the lyrics kind of flowed through me all of a sudden, like I had to write them.Naturally I thought that this was perfect for "REACH the SKY." I got to show my other side of composing; the classical side of music. It's a very important part of me, so I'm very happy that I got to show that side too.

How did you come to make the last song "Angel's Waltz," which is a piano instrumental track.

I've been playing the piano since I was 6 years old. But when I started to play guitar, piano kind of got in the shadow. In other words, I don't play piano much. But a while ago, around September of 2011, I decided to practice some piano again.So "Angel's Waltz" was a song I composed for myself just in the cause of practice. But since it sounded good, I thought I could include it to show that I'm able to play piano as well. The last bit of the song, however, is a piece I wrote years ago. It was in the same tempo and key as the new part I wrote, so they fit perfectly together.

Why are you attracted to visual-kei music?

I like the way you can combine music with looks. The way this scene works in all prospects is the most suitable for me I think. For some reason I feel like I was born to be here, because I don't fit anywhere else, really. It's the only place I really feel at home!

Who do you admire most as a guitarist?

There are many who inspires me, and in different ways. It's hard to pick who I admire the most actually.

Are there any artists that you'd like to perform with?

Of course! Seremedy played at V-ROCK FESTIVAL '11, so a lot of those dreams came true there. It was the second time we played with Versailles though (first time was in Sweden), which is a band I have huge respect for. Right now though, the artist I would like to perform with would be GACKT. He played with his band on V-ROCK FESTIVAL as well, but I would really like to play with him again!

Is there any place you'd like to visit when you are in Japan next time?

As always, I'd like to take a stroll in Harajuku!

Are there any dreams you'd like make come true as an artist in Japan?

Please give a message to Japanese listeners.

Hi, this is YOHIO! I'll make my solo major debut in Japan this April with the Mini Album "REACH the SKY." As I've put a lot of work, passion and soul into it, I hope that you'll enjoy listening to the result! From now on, please don't only support me as a member of Seremedy, but as a solo artist too. See you in Japan. Together we'll REACH the SKY!