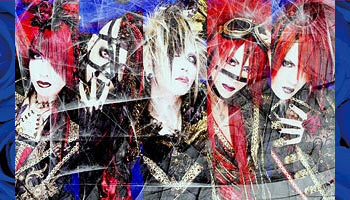 You are active again after 2 and a half years of absence from the music scene. Please tell us your feelings right now.

I mainly worked as a producer for other bands duLing that period. I now feel that I prefer playing my music on stage rather than giving other artists my verbal advice about their music. After all, I really love playing music as you probably know. So, I feel like I'm going to really enjoy it and do well now that I'm back with my new band.

How would you describe your Lin, your new band?

The word "Lin" could be translated into English to mean you're poised and ready with lots of strength built up inside, while you look tranquil. So, it's like the word is expressing a delicate balance between the calmness and intensity, and that would describe my new band.

Why did you name the band "Lin"?

I like how "Lin" sounds. It's beautiful. Also, the meanings of "Lin" and its image is close to what I've always wanted to express.

You released the first single "As If Forever Exists" from Lin on June 2, 2010. What are your thoughts about it?

We spent an enormous amount time and efforts in to producing the single, but now that it's completed, I feel good.

What would you say is the theme of the single "As If Forever Exist."?

It has a message. I wanted to express my feelings about the decision to come back to the music scene with the lyrics. It's ballade that's really emotional.

How about a coupling song "Freedom"?

I wrote the song with RIKU (the vocalist) and how sings live. I feel that this song turned into an uplifting, energetic song as its title might suggest.

Type B includes "Imaginary Lover" and Type C includes "Fake Dance" as the bonus tracks. Please tell us about these two songs.

"Imaginary Lover" is written about a person who wanders back and forth between reality and delusion because of heart-breaking unrequited love. The song represents emotions of this person painfully in love. The guitar solo is really emotional.

"Fake Dance" is all about temptations and decadence. There is heaven and hell in this song.

Is there anything you specially thought about in terms of sounds or performance?

I put emphasis on emotion the most. So, it took me a long time to compose the songs.

How about the recording? Was it a rough experience for you?

No. Composing the songs was a lot more exhausting.

What would you like to express through the songs?

How would you like this song to be listened to?

I would like everybody to listen the single at least once.

How would you describe your new bad Lin?

I would say that Lin is a band that is actually able to perform all the songs it records.

Any plan to break any new ground?

What else would you like to achieve with Lin?

I'm really happy to be recording songs and to be performing live again, and so there really isn't anything more that I want at this point. But I would say that it would be great if lots of people listen to my music.

Can I have a massage for your fans?

I would like to continue playing my music so that everyone, including fans who have been expecting me to come back, as well as people who listen to my music for the first time to really enjoy it and get a kick out of it. I will always be a proud Visual kei musician.