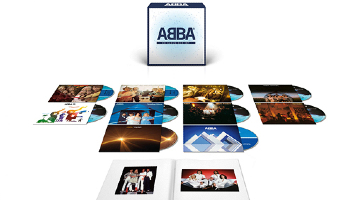 ABBA is releasing a 10 CD box set on June 1, 2022 to commemorate their upcoming special concert "ABBA Voyage," starting from May 27 in London. Its Japanese edition exclusively features the high-fidelity SHM-CD format.

This set consists of nine original albums, including their latest one "Voyage," and a bonus disc with their hits, which are not included in their original albums, and popular songs. This box set includes a miniature pamphlet of ABBA's first performance in Japan in March 1980, reproduced as close to the original as possible. CD box size (subject to change). *The contents of this release will be identical to the worldwide release, except for SHM-CD format and a description with Japanese translation.

Also, "ABBA Complete Video Collection" will be out on the same deta. This box set is a Japan-exclusive project that includes all of ABBA's hard-to-find existing video works. The set includes a miniature pamphlet of ABBA's first performance in Japan in March 1980, reproduced as close to the original as possible. DVD tall-case size (subject to change). Consists of "ABBA In Concert," "ABBA The Movie," "ABBA In Japan," and "The Essential Collection."

As the first pressing bonus, each set comes with a B4 poster feat. photo from the pamphlet of the concert in Japan in March 1980.