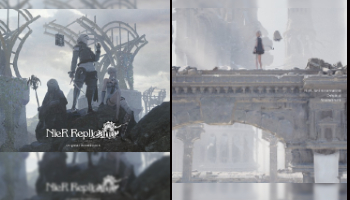 On the same release date of April 21, 2021, two original soundtrack albums will be release from the hit game "Nier" series: "NieR Replicant ver.1.22474487139..." and "NieR Re[in]carnation." In this page, we've compiled the full English translation of their product descriptions. Let's take a look.

This is the original soundtrack for the game "NieR Replicant ver.1.22474487139..." scheduled to release on April 22, 2021. This is an upgraded ver. based on "NieR Replicant which was released in April 2010. It tells the story of how the world of "NieR: Automata" begun. Includes in-game implemented background tracks.

The in-game background tracks for "NieR Re[in]carnation," the latest title in the "NieR" series for smartphones, which was released on February 18, 2021 and achieved 1 million downloads and the No. 1 App Store sales ranking on its first day of service, will already be available as a soundtrack.

The soundtrack is a collection of music that captures the charm of the new world of "NieR", created by the familiar team of series director Yoko Taro and composer Keiichi Okabe (MONACA). It is a long-awaited new work that follows on from "NieR: Automata," which sold an unprecedented 100,000 copies as a game soundtrack and was certified as a gold disc.