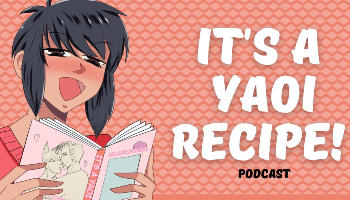 We asked for writing an article about Boy Love (Yaoi) Manga to Rebekah, who runs "IT'S A YAOI RECIPE!," an exciting podcast specializing in Boy Love Manga. And thankfully, she provided us a great selection of Boy Love comics.

The experts know best. Hope you enjoy this article as we thrilled on reading through.
Also, we strongly recommend you to listen to "IT'S A YAOI RECIPE!" podcast (direct links listed on the very bottom of this page!).

Boy Love Manga Selected by Rebekah Joseph from IT'S A YAOI RECIPE!

Shizuma wakes up to a man next to him. He couldn’t remember a thing last night as Shizuma was drinking his sorrow away after been dumped by his girlfriend. Minato felt annoyed by this and wanted to take revenge on Shizuma. He has a plan to seduce him then break his heart. This manga is a must read!

A very sensual story between a salaryman and a dentist. Mimori always tries to avoid going to the dentist because his mouth is his erogenous zone. But he had no choice to visit the dentist to remove a painful wisdom tooth. A handsome young dentist work on removing Mimori’s wisdom tooth. The dentist noticed Mimori become aroused by oral stimulation. The dentist offered to help Mimori then out of nowhere he suddenly kisses Mimori.

A highly popular BL manga and has been adapted into a drama. A sweet love comedy, drama with a twist. An awkward shy Adachi turned 30 and has suddenly gained the power to read peoples minds. Adachi finds out his colleague Kurosawa secretly admires him and has a crush on him. Adachi gets himself into tricky situations and Kurosawa sneakily tries to get closer to him. I highly recommend reading this manga as well as watching the drama series.

Kensuke is a happy go lucky guy but he was intimidated by his colleague, the handsome Matsui, who is more buff than him. He gets all the attention. They both don’t seem eye to eye. Then Kensuki and Matsui coincidently were alone, drinking and challenged each other to a bet. A bet is who can come first. Which is a dangerous bet! As one thing leads to another, as Kensuke and Matsui get hot and sexually physical. It is a very fun read and the drawing are great!

A truly romantic vampire love story. A vampire Mihail raised a young boy soldier called Johann as his son. Years pass, Johann has grown up to a handsome young man but the vampire still dotes on and treats him as his little angel. But certain circumstances have brought them even closer. If you are a fan of BL vampire this manga I highly recommend reading UnDead Puppy.

If you love reading Omegaverse stories. I recommend reading Haga-kun wa Kamaretai by Sakishita Senmu. There is great chemistry between the two main characters (Omega and Alpha).

A story about attraction. Apollo has been hired to work at a brothel, located on a beautiful island. He has been tasked to get the men ready for the client. Apollo is responsible for looking after Phi, the most popular prostitute in the brothel. Apollo gets Phi body ready for the clients however sexual tension starts to rise as both Apollo and Phi get very close. Both men had to obey the rule of the brothel, no sex or fall in love. Phi is curious about Apollo’s past and likes to tease him when he is alone with him.

This manga is very intriguing to read. The scene are drawn so sensual and exotic. Ranmaru Zauraya drawing is fantastic. If you're a fan of Coyote, Void and Liquor and Cigarettes, definitely check out Shangri-La no Tori.

Uta was invited to Minami home to be Minami’s private teacher. Uta teaches Minami a lesson in lovemaking, and each private session becomes very kinky. Highly recommend this manga if you love a lot of hot sexy action and beautiful drawn men.

Yoji Kuroe a graphic design student, asked Toma Kishida a fashion student, to make a cosplay outfit for him. Toma is talented in making cosplay outfits. Toma agrees to create Yoji’s outfit but only if he could model for him wearing skin-tight, full-body spandex. Yoji agrees to his terms and model for Toma. But Toma couldn’t resist temptation and get sexual satisfaction seeing and feeling Yoji in tight spandex.

Buy Boy Love Manga Selected by Rebekah Joseph from IT'S A YAOI RECIPE!

Make sure to check out other Boy Love manga titles from these artist mentioned on this list. You can use this article as a guide for buying Boy Love Manga at CD Japan. I hope this list will inspire you for your next read and have in your BL collection.


Where and Why I Choose CD Japan to Buy Boy Love Manga.

I was recommended to buy Manga from CD Japan from my friends. My friends had ordered items from CD Japan before and said CD Japan is a great online store to buy music, game, Anime, figurines, book and other Japanese related items directly from Japan.

I am fujoshi (a fangirl of love BL/Yaoi) I love reading Boy Love Manga. I was searching for more Boy Love Manga to buy directly from Japan. I am also studying Japanese and I wanted to improve my Japanese by reading books in Japanese. In the United Kingdom (where I live), Manga is a small market. Most of the Manga available in UK bookstores is often popular manga titles.

Whereas Manga in Japan is a huge industry and there is so much new Manga I want to explore. There are lots of Manga I have never read. Some may not get translated into English or get a publication in English.

My books arrived brand new, in perfect condition. with no damage. They took care in packaging my items carefully, so the books don’t get damaged during transit, especially being shipped so far away across the world.

I like the coupons offers and points you can earn, which can be redeemed for your order. I also like the delivery choice and the information about the delivery service.

I had a positive shopping experience shopping at CD Japan. It has now become my new favourite shopping site for buying Manga. I will continue to shop at CD Japan. For each Manga I mention on my podcast, I will also attach the link to where you can buy it from CD Japan site.

If you are interested in Boy Love/Yaoi topics or Boy Love manga, check out my podcast ‘It’s A Yaoi Recipe’.
On this podcast, I chat about BL/Yaoi manga, anime and general fujoshi Otaku talk. My podcast is available to listen on Spotify and Apple Music Podcast. I upload new episodes every week normally on Wednesday and Friday.

If you have any question or manga recommendation, you can contact me on @reebeksart or visit my website: http://reebekillustrations.com/podcast-its-a-yaoi-recipe/
I would like to thank CD Japan for reaching out to me and offering me this opportunity to write this article.

About "IT'S A YAOI RECIPE!" podcast

A podcast show about BL/Yaoi manga, comics, anime and general fujoshi Otaku talk.
My name is Rebekah Joseph. I’m an artist from the Uk. I have a passion and interest in reading Yaoi manga and love sharing my thoughts on the manga I read. Also include some fun topic too.

Inside CDJapan (from CDJapan Official YouTube CH / external link)
"Inside CDJapan" focuses on behind-the-scenes of our company in blog-style. Hope this series help you understand us.

Manga Book Cover Guide: To Select The Perfect Size for Your Manga Collection

Learn Japanese at CDJapan
To support the people with a strong will to study Japanese, we've listed our recommendations to make your Japanese learning process more faster, smarter, and enjoyable. Let's use Japanese with us!