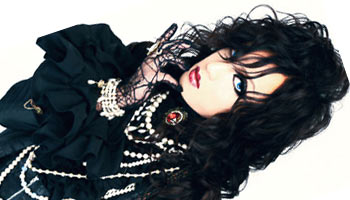 Kaya, the tanbi kei singer --a person fond or obsessed with works of art and beautiful things-- will release his awaited new single "Taboo" on July 31.

Kaya, the tanbi kei singer --a person fond or obsessed with works of art and beautiful things-- will release his awaited new single "Taboo" on July 31.
After 8 months from his previous release "Nocturne", Kaya comes back with his new piece of work choosing "Decadence" as his theme. The upbeat tune heavily uses digital beat which is composed by Ken Morioka from ex.SOFT BALLET. The song goes back to the core of Kaya's world; a mysterious beautiful world of "Decadence".

The B-side single "Infection" is a speedy, dark, exquisite tune which lets us fully enjoy Kaya's talent to express his world.

His DVD, "Nocturne - Ugomeku Bisho -", will also be released on the same date as "Taboo" is a must watch DVD featuring his solo concert on March 9, 2013.

So how does Kaya always stick to his belief? It's because he truly loves to express his world from the bottom of his heart.
With the skills he gained after many experiences as an artist, he continues to prove to listeners with this new single "Taboo" that he does not compromise when it comes to virtue.

His forbidden potion will make you fall into Kaya's world.

Starts out as a member of a band "Schwarz Stein" produced by former MALICE MIZER member, Mana. In 2006, he starts his career as a solo singer.
Releases his first major debut single from Universal Music in 2008.

While he is a so called Visual-kei artist, he is not hung up with the idea of a band, and so he uses dancers and drag queens at his live events.

He continues to explore a new style for the visual-kei world holding theatrical lives where he engages as his own scriptwriter and producer.

His fans expanded to overseas and held lives in North America, South America and Russia.

Tell me how you feel after finishing your new single "TABOO" due on July 31?

Kaya: I'm so excited!I did the best work ever, and I want every one all over the world to listen to my new song!

Your theme for this single is decadence. Could you tell me why you brought decadence as the theme?

Kaya: Because it is my personal main theme.I have always been strongly attracted to the world of gothic or decadence, and my mission has been to express these worlds with songs and music.After starting my solo career, I have challenged quite a lot of themes, including sweet cheerful songs, jazz, chanson, Japanesque, and more.So I chose decadence because I thought it was about time to go back to my origin.

Tell us what kind of a single did "TABOO," turn out to be?I heard it was composed by Ken Morioka (ex.SOFT BALLET).

Kaya: This is my ideal . . . no, it was more than that! It is great!l hope I can work together with Ken again.

What kind of emotions did you put into this song?

Kaya: Decadence.Decadence is an idea that takes depravity as something beautiful.And if it takes sinning to indulge in that beautiful world, it is worth it.

What kind of song is the B-side song, "Infection"?

Kaya: This song turned out to be very aggressive and dark while "TABOO" is a catchy and pop tune.

What's the theme when you wrote the lyrics of this song?

Kaya: The base idea of this song is the same as "TABOO."But "Infection" has a more specific theme.This song's theme is male prostitution.

Where is the highlight of this single?

Kaya: I expressed decadence --which apparently has a dark image-- in a beautiful way in "Taboo" and "Infection"I want people to feel the comparison between light and darkness which I have expressed in decadence and beauty.

On the same release date, you'll bring a new DVD "Nocturne - Ugomeku Bisho -,"could you tell me about it?

Kaya: This DVD includes my one-man concert held on March 9, 2013 where I embodied a doll theme into "Nocturne". I really want people from overseas to watch this as it is difficult for them to come to my concerts in Japan.It also features a music video for "Marionette," a leading song of the album.

What do you value when you work?

Kaya: Being honest to myself. And trying to make things with care.

Are there any special moments that you makes you enjoy doing lives?

Kaya: There's that moment when I connect with the audience at every concert.That makes me happy from the bottom of my heart.

What does singing mean to you?

When is the most relaxing moment throughout your day?

Kaya: When I play with my cats "Goma" and "Uni" before I go to bed XD.

Is there anything that you collect?

Do you have a dream that you set as a goal.

Kaya: I want to sing over the world!So far, I performed in various countries such as the US (Los Angeles, Washington D.C.), Mexico, Brazil, Chili, Argentina, Peru, France (Paris, Marseille), German (Cologne, Munich, Hamburg), Poland (Poznan), Italy (Milan), Finland, UK (London), and Russia (Moscow).I am going to visit the Netherlands in August.I want to sing at many more cities all over the world!

Can your fans have a message?

Kaya: Thank you for your continuous support!I made a wonderful piece this time, which I really want you to listen!I will be going to your city one day so please give me your support.With love.