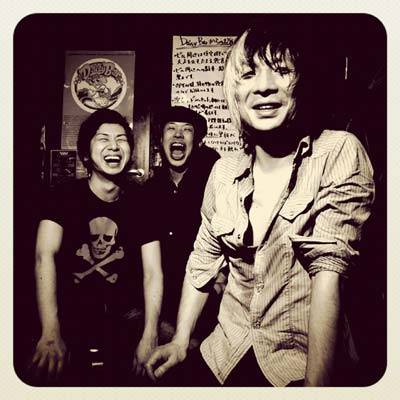 HAVENOT'S bring their new album "ROCK' N' ROLL WEEKEND" on April 21, 2012 for the first time in 14 years since they released their first album from Repent Records in San Francisco in 1998. This new album includes their first Japanese song.

They have over 60 concerts every year, and this time, they will have the release tour of this album at over 40 cities all over the country.

-- Nice to meet you. At first, could you introduce yourselves?

Hello, we are THE HAVENOT'S from Yokohama. We have had musical activities worldwide since 1994.

-- Congratulation on the release of your second album "ROCK'N'ROLL WEEKEND." Cut to the chase, what is the selling point of this album?

Thank you. This album includes quality of 12 rock'n roll songs not only their exciting sound.

-- This is the first album in 14 years for you. Are there any changes since the release of your first album? And on the other hand, is there anything consistent?

Whether good or bad we have not change at all. Only thing different than usual is making the album!

-- This time, you challenge Japanese song for the first time. Are there any difficulties through the production process?

Not at all. On the contrary, we realized we can write lyrics in Japanese faster than English after all these years!

-- You energetically have over 60 concerts every year. What do live performances mean to you?

-- At CDJapan, there are enormouse overseas customers. Can we have a message to your fans living outside Japan?

When we talked with overseas friends through FACEBOOK, one of my friends in Melbourne said "I always buy Japanese CD from CDJapan." We think Japanese artists need to introduce CDJapan widely across to the world.

-- Could you tell us your future activities?

So far, we released albums and had concerts overseas to gain recognition, but now we can easily spread information towards all over the world from Japan. We will take advantage of them and have more concerts to become friends with people worldwide.

-- At last, do you have a final message for our readers?

Please listen to our music! We will have a free concert soon, so we are looking forward to seeing you guys!