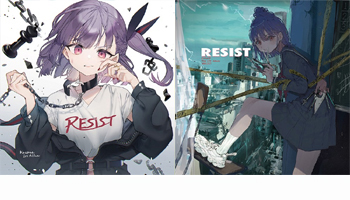 VTuber TENJIN KOTONE to release the first album under the name "Kotone" on July 28, 2021! CDJapan exclusive bonus sticker is offered on a first-come-first-served basis.

The album includes "Autonomy," songs produced before her debut, and more for ten tracks in total (subject to change). Limited edition comes with a fabric "fortune slip."

Originally, TENJIN KOTONE was a deity worshipped in a venerable shrine in Kyoto for 500 years, and she has saved humans in various ways, such as "family safety," "business prosperity," "good health," "traffic safety," and "prayer for school success." However, after taking a long nap, she was forgotten and no longer revered by humans.

She wondered what the humans were obsessed with without her, and when she investigated, she found out that it was anime, games, voice actors, idols, and figures.

As she researched, she herself was attracted to these things and decided to post videos on YouTube to make people smile and become a god of entertainment...