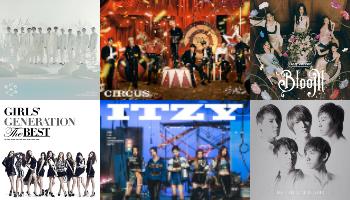 Thankfully, we've received lots of applications to CDJapan ambassador project to support us by providing articles. Let us introduce you a great article focusing on K-Pop by Asian Music Kingdom. Hope you enjoy this article like we thrilled on reading through.

There's no denying K-Pop is one of the biggest genres in music right now. It comes as a result of the Hallyu Wave, a cultural phenomenon that has taken over the world by storm. Not only has it made Korean culture more accessible, but it also gave the opportunity to many up-and-coming groups and artists to generate a vast fanbase overseas, especially in Japan.

Acts such as BTS, BLACKPINK and TWICE already made a name for themselves amongst Japanese fans and I'm sure there's still more to come. Although aforementioned groups are the leading examples of how K-Pop left its footprint on modern culture in Japan, there are dozens of acts already following in their footsteps. Some of them are just starting to built a fanbase outside of Korea, while other were household names way before K-Pop became what it is today.

If you're thinking of picking up new groups, then you're in luck, because I've decided to highlight ten acts, which I do believe contribute - or will do so in the future - to the topic of the popularity of Korean Wave in Japan.
About Asian Music Kingdom

MONSTA X is an outstanding example of how Korean acts can achieve great things overseas. In 2017 they introduced themselves to the Japanese public with a remade version of their hit single "Hero", which ultimately resulted in a string of fairly successful singles in the coming years. They already have three Japanese studio albums under their belt, each filled with pop gems and ready-to-dance anthems. What's more, Wonho, who left the group in 2019, has also successfully debuted in Japan with his own material, proving his potential as a solo artist.

If you're a die-hard K-Pop fan, I'm sure you've already heard about SHINee, another group with a very fruitful career in Japan. They released a ton of original material in Japanese, with their recent effort being the mini album "Superstar", which hit the stores nationwide in 2021. It's only a cherry on top though, as the group's discography in Japan contains a total of five full albums, a best-of compilation and numerous singles released in the span of seven years. Not to mention members' solo works, including Onew's "Life goes on", which was just released in early July.

ITZY, on the other hand, is an example of an up-and-coming group with great potential. Their debut single in Japan titled "Voltage" divided the fanbase, as the song didn't match everyone's expectations, but one thing's certain - it was memorable and the girls surely made a mark in the industry. The group has also released a compilation of remakes of their Korean hit songs like "Dalla Dalla" or "Wannabe", which could be a great starting point for new fans.

If there's a K-Pop act, which paved the way for so many of their future followers, it sure is Tohoshinki. Starting as a five-member group many years ago and reformed as a duo in 2010, TVXQ has been in the industry for almost two decades, which is an undebiable feat. As one might expect, their style changed overtime, but they're keeping up with current trends and continue to inspire younger generations. Today Yunho and Changmin are well-rounded entertainers and their vast Japanese music catalogue is impeccable - from dance tracks, through R&B jams, to powerful ballads.

Red Velvet are perceived by many as SM Entertainment's leading "it" girls and it's hard to disagree. They embody everything a fan could wish for and never fail to deliver - from upbeat tracks like "Peek-A-Boo" or "Power Up", through classy gems like "Feel My Rhythm", finishing on experimental songs reminiscent of f(x)'s greatest creations. Surprisingly, Japanese albums are no different and add a lot to their hit-packed discography, with most recent effort titled "Bloom" definitely being one of their best to date.

If I'd have to pick one group, which I do believe is capable of creating timeless songs for many to enjoy, it'd be Stray Kids. Their Korean discography is remarkable, with numerous bops over the years, so the Japanese debut was just a matter of time. As expected, they didn't disappoint and I perceive them as one of the strongest players in the industry right now. Boys' most recent release, a mini album titled "Circus", marks another milestone in their career and the title track might be one of the best from K-Pop groups in Japan this year.

When discussing the greatest creations of K-Pop groups in Japan, it feels impossible not to mention the impact Girls' Generation have had on the industry as a whole. They were, and still are, the moment. Songs like "Genie" or "Gee" remain iconic to this day, but there are so many other tracks worth mentioning, like "Galaxy Supernova", "Paparazzi" or "Flower Power", which made me fall in love with them even more. One thing's certain - with their upcoming comeback and Hyo's and Taeyeon's solo works this year, their legacy will live forever.

GOT7 recently made a thrilling comeback with their eponymous mini album and the fandom rejoiced. What's also worth mentioning is a very successful Japanese career they have had before departing from JYP in early 2021. Their full album "Moriagatteyo" was a highlight for sure and songs like "Hey Yah", "Around the World" or "Love Train" remain one of my favorites. "Love Loop" was their last effort in Japan so far, but there was a potential for much more.

Seventeen has become one of the most popular K-Pop acts in Japan these days and everything happens for a reason. They continue to top the charts with each release and it shouldn't come as a surprise, as their discography is very solid. In Japan it's no different, as songs like "Ai no Chikara", "Happy Ending" or "24h" proved to be very popular with the fandom. I do believe their Japanese catalogue is worth giving a try, even if you're not a Carat. Who knows, maybe that'd be the turning point for you?

EXID's Japanese albums were a very pleasant surprise when I first listened to them. Usually fans find out about a K-Pop group through their original catalogue, but for me it was the opposite. I'm very glad I gave the girls a chance, because "TROUBLE" and "B.L.E.S.S.E.D" became one of my favorite albums of all time. If you're not familiar with EXID's works in Japan, I highly recommend picking them up, as they combine the best qualities the girls possess. What's more, they have announced a best album coming in September, so mark your calendars!

Hi! I'm Przemek, a friendly but introvertive person behind Asian Music Kingdom. Music is my calling and K-Pop is my getaway, but I sure love J-Pop and everything Japan-related. If there's a CD I like, I'm getting my hands on it no matter what. Join me on my adventures through colorful collages and current music trends on Instagram!
Instagram: https://www.instagram.com/asianmusickingdom/ *All the SNS posts in this page are provided by Asian Music Kingdom.