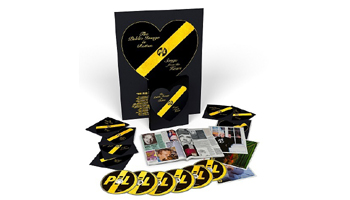 Public Image Limited is releasing a deluxe box set, commemorating the 40th anniversary since the band formed. This set covers the whole career of them with appealing contents. Japan edition features SHM-CD format.

CD1 contains 18 leading songs from their singles.
CD2 contains 17 rare tracks.
CD3 contains 13 tracks of various versions.
CD4 contains 14 unreleased tracks, including "Bad Night" taken from the rare "Commercial Zone" session.
CD5 contains 14 live tracks taken from a concert in New York, which was held along with the album "9" out in 1989.
DVD1 includes 21 music videos and 14 live tracks, which is from their performance at "Tallinn Rock Summer Festival" held in 1988 in Estonia.
DVD2 includes eight tracks from BBC TV shows and 15 live tracks, which is from their performances in Australia.