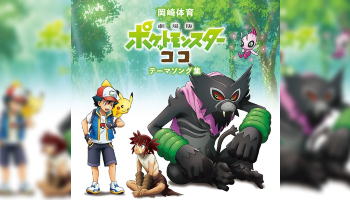 Known as a big fan of Pokemon, and responsible for both the opening and ending theme of the TV anime "Pokemon Sun & Moon", Okazaki Taiiku, who is also known as a big Pokemon fan, produced the theme song of the film version of the anime for the first time in his career.

"Pocket Monsters the Movie: Coco", which will be released in the winter of December 25, 2020 for the first time in the history of Pokemon movies, is the latest Pokemon movie, which marks the 23rd movie release. Okazaki Taiiku produced the main theme and all six theme songs for the film.

It's the first time for a Pokemon movie to use multiple songs by a single artist in this film. Some of the songs written by Okazaki Taiiku for this film features famous artists as vocalists who he believes most suits the scenes in the film.

In addition to his own songs, Tortoise Matsumoto (Ulfuls) and other splendid artists will participate in the main theme "Fushigina Fushigina Ikimono". In addition, four of the theme songs from the TV anime "Pocket Monsters Sun & Moon" are included as bonus tracks. Kimi no Bouken" and "Kokoro no Note" are available on CD for the first time!